Archive for the ‘Afghanistan’ Category

>Jihadists Are Murderers, Looters, Die Hard Villains Of The World – Much Like Moammar Gadhafi

By Scott Stewart
As George Friedman noted in his geopolitical weekly “Revolution and the Muslim World,” one aspect of the recent wave of revolutions we have been carefully monitoring is the involvement of militant Islamists, and their reaction to these events.
Militant Islamists, and specifically the subset of militant Islamists we refer to as jihadists, have long sought to overthrow regimes in the Muslim world. With the sole exception of Afghanistan, they have failed, and even the rise of the Taliban in Afghanistan was really more a matter of establishing a polity amid a power vacuum than the true overthrow of a coherent regime. The brief rule of the Supreme Islamic Courts Council in Somalia also occurred amid a similarly chaotic environment and a vacuum of authority.
However, even though jihadists have not been successful in overthrowing governments, they are still viewed as a threat by regimes in countries like Tunisia, Egypt and Libya. In response to this threat, these regimes have dealt quite harshly with the jihadists, and strong crackdowns combined with other programs have served to keep the jihadists largely in check.
As we watch the situation unfold in Libya, there are concerns that unlike Tunisia and Egypt, the uprising in Libya might result not only in a change of ruler but also in a change of regime and perhaps even a collapse of the state. In Egypt and Tunisia, strong military regimes were able to ensure stability after the departure of a long-reigning president. By contrast, in Libya, longtime leader Moammar Gadhafi has deliberately kept his military and security forces fractured and weak and thereby dependent on him. Consequently, there may not be an institution to step in and replace Gadhafi should he fall. This means energy-rich Libya could spiral into chaos, the ideal environment for jihadists to flourish, as demonstrated by Somalia and Afghanistan.
Because of this, it seems an appropriate time to once again examine the dynamic of jihadism in Libya.

Libyans have long participated in militant operations in places like Afghanistan, Bosnia, Chechnya and Iraq. After leaving Afghanistan in the early 1990s, a sizable group of Libyan jihadists returned home and launched a militant campaign aimed at toppling Gadhafi, whom they considered an infidel. The group began calling itself the Libyan Islamic Fighting Group (LIFG) in 1995, and carried out a low-level insurgency that included assassination attempts against Gadhafi and attacks against military and police patrols.

Trouble on the Horizon?

This deep streak of radicalism in eastern Libya brings us back to the beginning. While it seems unlikely at this point that the jihadists could somehow gain control of Libya, if Gadhafi falls and there is a period of chaos in Libya, these militants may find themselves with far more operating space inside the country than they have experienced in decades. If the regime does not fall and there is civil war between the eastern and western parts of the country, they could likewise find a great deal of operational space amid the chaos. Even if Gadhafi, or an entity that replaces him, is able to restore order, due to the opportunity the jihadists have had to loot military arms depots, they have suddenly found themselves more heavily armed than they have ever been inside their home country. And these heavily armed jihadists could pose a substantial threat of the kind that Libya has avoided in recent years.
Given this window of opportunity, the LIFG could decide to become operational again, especially if the regime they have made their deal with unexpectedly disappears. However, even should the LIFG decide to remain out of the jihad business as an organization, there is a distinct possibility that it could splinter and that the more radical individuals could cluster together to create a new group or groups that would seek to take advantage of this suddenly more permissive operational environment. Of course, there are also jihadists in Libya unaffiliated with LIFG and not bound by the organization’s agreements with the regime.
The looting of the arms depots in Libya is also reminiscent of the looting witnessed in Iraq following the dissolution of the Iraqi army in the face of the U.S. invasion in 2003. That ordnance not only was used in thousands of armed assaults and indirect fire attacks with rockets and mortars, but many of the mortar and artillery rounds were used to fashion powerful IEDs. This concept of making and employing IEDs from military ordnance will not be foreign to the Libyans who have returned from Iraq (or Afghanistan, for that matter).
This bodes ill for foreign interests in Libya, where they have not had the same security concerns in recent years that they have had in Algeria or Yemen. If the Libyans truly buy into the concept of targeting the far enemy that supports the state, it would not be out of the realm of possibility for them to begin to attack multinational oil companies, foreign diplomatic facilities and even foreign companies and hotels.
While Seif al-Islam, who certainly has political motives to hype such a threat, has mentioned this possibility, so have the governments of Egypt and Italy. Should Libya become chaotic and the jihadists become able to establish an operational base amid the chaos, Egypt and Italy will have to be concerned about not only refugee problems but also the potential spillover of jihadists. Certainly, at the very least the weapons looted in Libya could easily be sold or given to jihadists in places like Egypt, Tunisia and Algeria, turning militancy in Libya into a larger regional problem. In a worst-case scenario, if Libya experiences a vacuum of power, it could become the next Iraq or Pakistan, a gathering place for jihadists from around the region and the world. The country did serve as such a base for a wide array of Marxist and rejectionist terrorists and militants in the 1970s and 1980s.
It will be very important to keep a focus on Libya in the coming days and weeks — not just to see what happens to the regime but also to look for indicators of the jihadists testing their wings.
Reprinting or republication of this report on websites is authorized by prominently displaying the following sentence, including the hyperlink to STRATFOR, at the beginning or end of the report.

“Jihadist Opportunities in Libya is republished with permission of STRATFOR.”

Simply copy and paste this code:

>Fresh From His Afghanistan Campaign 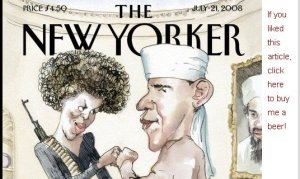 According to a Pew poll taken in March, one American in 10 thought Obama is a Muslim, while 34 percent said they were unsure. In fact, Obama considers himself a Christian and was a longtime member of a United Church of Christ congregation in Chicago before controversial statements by its outgoing pastor led the senator to quit this year.

>Dress Him Up In War Gear And Give Him A Gun 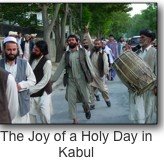 KABUL, Afghanistan – Associated Press writer NAHAL TOOSI writes about Democratic presidential contender Barack Obama landing in Afghanistan. “This is the start of a tour of combat zones and foreign capitals in which he will visit with U.S. forces in Kuwait and then Afghanistan — the scene of a war he says deserves more attention and more troops.”

Obama was in Kabul as part of an official congressional delegation and then flew to eastern Afghanistan. Staff. Obama and two other senators were making a brief stop in Jalalabad airfield, in Nangarhar province, to visit with soldiers stationed there.

The delegation also met with top military leaders and troops at Bagram Air Base, the main U.S. military base in the country, according to a U.S. military officer who spoke on condition of anonymity because the officer was not authorized to release the information.

This is Obama’s first visit to Afghanistan. John McCain has criticized him for never coming to the war zone, yet being so outspoken and critical of it. His visit is timed to garner votes–it comes less than four months before the general elections. Republican nominee McCain has been there three or four times, all without much fanfare. But the networks are pulling out all the stops for their sweatheart, Obama, and will shed on him plenty of positive coverage and feedback. Who are the other two senators? Why worry about that–Barak is the story. As long as he doesn’t make a mistake, like accidentally kicking a live gernade or falling on the sharp end of a bayonet, he may make considerable headway back home.