Archive for the ‘drugs’ Category

>What Is It Obama Doesn’t Understand About The Mexican Invasion?

Texas Governor Rick Perry has accused President Barack Obama of “gambling with American lives” after a bullet believed to be from a gun battle in Mexico hit a building in the US state.

“For the second time in two months, bullets from a gun battle in the escalating drug war in Juarez have struck a building in El Paso,” Perry said.

No injuries were reported, but Perry said the federal government’s failure to reinforce the border with Mexico was endangering US lives.

“It is unconscionable that the Obama administration is gambling with American lives,” the Republican governor said.

“It’s time for Washington to stop the rhetoric and immediately deploy a significance force of personnel and resources to the border.”

Perry noted that in June, a number of bullets believed to be from a gun battle in Ciudad Juarez hit a building in El Paso, and that a car and a building at the University of Texas-Brownsville were similarly hit a year ago.

Texas, like a number of US states on the border with Mexico, has expressed increasing concern about the drug trafficking-related violence raging next door.

The battle between drug cartels fighting over lucrative smuggling routes and Mexican government operations against the gangs have left some 28,000 people dead since December 2006.

>Read Don White’s definitive article about the laxness of drug enforcement in Major League baseball today on Yankee Wizard. It’s sad, really. The current commissioner of baseball, Bud Selig, has a record of accomplishment, but over the past 18 years at the helm of baseball this commissioner seems to have fallen asleep regarding drug enforcement, while aggressive leaders of other sports have outdistanced this man, much to the detriment of the game and its fans. Read Mr. White’s probing article about drugs in America, and particularly anabolic steroids and Human Growth Hormones in baseball and the part they are having in tarnishing the good name of baseball and letting down fans and players alike.

Confronting Addiction in the LDS Community

Addiction: There was a time when the LDS community thought of it as a “Word of Wisdom” problem.  Now we know that many of those things we dismiss as “bad habits” are addictions and controlling us more than we know.
By Colleen Harrison

>There are many books out now condemning medical blunders. One I’ve been reading is 100 Most Common Medical Blunders …and How to Avoid them All! published by Boardroom, Inc. in 2008. 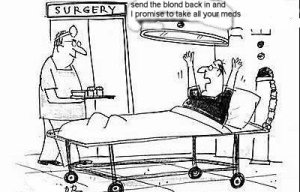 The source is Paul Barach, MD. He tells about a blunder he made while a third-year med student when an attending physician told him to insert a central intravenous line (IV) into a 75-year-old patient suffering from emphysema. Dr. Barach had never performed the procedure before. Alone and unguided, he wound up puncturing the air sac surrounding the lung, and the patient later died of related complications.

Though Dr. Barach went on to become a noted physician, this incident plagued him for years. He studied blunders like these with a desire to find out how errors can be prevented.

Here, we offer his list of mistakes and ways to avoid them. For starters, we should be absolutely sure that an operation is necessary before having a part excised. For example, experts tell us that one-fourth of all appendectomies
are unnecessary because of incorrect diagnosis and the appendix is not diseased.

This blog will not be all inclusive of the common errors Dr. Barauch gives, however on subsequent blogs we will pick up on some more:

1) Medication errors. This includes oral as well as those given through the veins (IV drugs) for serious conditions such as heart attack and stroke. Also included are subcutaneous injections (below the skin) such as a diabetic’s insulin shot. The Institute of Medicine estimates that between 3% and 5% of all medication is administered incorrectly. That is probably a far too-conservative estimate.

These errors can happen in doctors’ clinics, hospitals, offices, home, and pharmacies. For example, a drug might not be given at the right time, in the right dose, or with the right frequency. In most instances, this type of error is minor and has no lasting consequences.

However, IV drugs act much more quickly than oral medications and these errors are usually irreversible and of lasting or severe consequence. With chemotherapy, dosing is complicated and requires different combinations and amounts of toxic drugs.

Are certain people at increased risk for certain drugs?
Psychiatric and older patients are at high risk. Older people are more likely to be on multiple drugs and less likely to to pay close attention when drugs are being administered. Psychiatric patients usually don’t ask questions when given medications.

What can patients do to make sure their drugs are being administered properly?
Get very clear and detailed explanations from your provider beforehand and in writing. Find out what you are going to be taking, for how long, and what side affects might accompany these drugs.

All the best in news, advice, and that which makes you happy.

>The following article is from the Samuel Nobel Foundation web site. The advice is important for everyone, not just farmers, especially in this drug-filled, terrorist prone society in which we live.

I recently attended a meeting where fertilizer security was one of the chief topics. I had heard most of the information before in bits and pieces, but having it presented all at once in an organized fashion got me thinking more about its importance. There are a lot of people in our area who are looking to get fertilizers for reasons other than increasing crop yield.

As most of you know, there are two main uses for stolen fertilizer: explosives and drugs. These are vitally important topics in our world today, and it is essential that we do all we can to make it difficult for thieves to misuse fertilizer.

Explosives
It is widely known that ammonium nitrate can make a powerful explosive if mixed, handled and stored in certain ways. It is used legally for a number of legitimate purposes, such as construction. The problems arise when someone wants to use ammonium nitrate to make explosives for sinister purposes.

It is not as well known that urea also can be used to make a very powerful explosive. Using urea to make explosives results in a very unstable compound — something that is more powerful and less stable than nitroglycerine.

The bottom line is that if you store ammonium nitrate or urea on the farm, make sure they are placed in a secure area that can be easily monitored by you. Do not put them in old buildings far away from areas you frequently visit. Report any suspicious people around the fertilizer area to local law enforcement agencies.

Drugs
Possibly the most bizarre thing that has occurred in my career as a fertilizer expert is the recent use of common fertilizers to manufacture illegal drugs, namely methamphetamine. The most commonly-used fertilizer in the drug manufacturing process is anhydrous ammonia, but a drug manufacturer who’s a particularly good chemist can also use urea, ammonium nitrate, liquid UAN solutions and other sources of nitrogen. My opinion is that someone who has such a sophisticated knowledge of chemistry could get a productive job and make good money legally.

Drug manufacturers are especially desperate to obtain anhydrous ammonia since it is the easiest fertilizer source to use in making the drug. They will stoop to incredible feats of stupidity to obtain the material.

For those not familiar with anhydrous ammonia, it is a liquid when stored in strong steel tanks at very high pressure and very low temperatures. When exposed to normal temperatures and pressures, it becomes a gas. This gas is very damaging to the eyes and lungs, and is quite unpleasant to any other exposed skin it touches.

When farmers apply anhydrous ammonia, they inject it directly from the storage tank deep into the soil through specially-designed knives and hoses. This insures that the farmer does not have to handle it. In the drug manufacturers’ zeal to obtain anhydrous ammonia, they will try to store the material in glass jars, thermos jugs, ice chests and soft drink bottles. Keep in mind that handling anhydrous ammonia in any way other than a closed system with strong steel tanks is extremely dangerous. Unfortunately, thieves will often leave the valve open and release large amounts of ammonia into the air even though they stole only a small amount. This can be dangerous to innocent people living in the area.

While the law of natural selection should eventually take care of this problem, there are things you can do to help law enforcement. The Fertilizer Institute has published a list of steps for farmers and ranchers to follow to help foil the thieves.

Let’s all help do our part to make sure fertilizers are used for improving plant growth, not for illegal purposes.

The bottom line is that if you store ammonium nitrate or urea on the farm, make sure they are placed in a secure area that can be easily monitored by you. Do not put them in old buildings far away from areas you frequently visit. Report any suspicious people around the fertilizer area to local law enforcement agencies.