Archive for the ‘EAA AirVenture’ Category

>The Future Is Here–Is It? 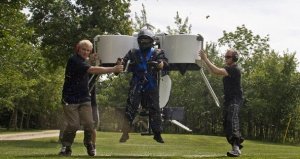 Photo by Andy Manis for The New York Times
John Schwartz of The New York Times testing a jetpack to be unveiled Tuesday at an air show in Wisconsin. The inventor, Glenn Martin, left, and Ray Thomsen guide him.

OSHKOSH, Wis. — The New York Times has spotlighted a New Zealand inventor who believes he has the makings of a futuristic technology. It is to enable man to rise off the ground wearing a jetpack and to “feel the force of dreams. Very, very noisy dreams.”

On Tuesday, an inventor from New Zealand plans to unveil what he calls “the world’s first practical jetpack” at the EAA AirVenture, the gigantic annual air show here. The inventor, Glenn Martin, 48, who has spent 27 years developing the devices, said he hoped to begin selling them next year for $100,000 apiece.

“There is nothing that even comes close to the dream that the jetpack allows you to achieve,” said Robert J. Thompson, the director of the Bleier Center for Television and Popular Culture at Syracuse University. He called it “about the coolest desire left to mankind.”

For Mr. Martin, the jetpack is the culmination of a dream that began as a 5-year-old in Dunedin, New Zealand. For those who still remember childhood dreams of flying and comic-book visions of the 21st century, the jetpack suggests the possible fulfillment of the yearning for those long-promised gifts of technology.

Buck Rogers and James Bond used jetpacks, and since the 1960s, several real jetpack designs have been built from metal, plastic and propellant. None has flown more than a minute. Mr. Martin’s machines can run for 30 minutes.

At first sight, parked in the back of the U-Haul van Mr. Martin used to cart it to the air show, it did not look like the classic jetpacks of science fiction. It stands about five feet tall and its rotors are encased in two large ducts that look a bit like cupcakes. It rests on three legs. Mr. Martin has somehow made the future look both sleek and nerdy.
Read More: